North Park Village is a unique and beloved area in Northwest Chicago; a 155-acre site that is home to unparalleled natural beauty and a rich history. Located adjacent to the neighborhoods of North Park, Sauganash, and Albany Park, North Park Village is also a place whose preservation has been made possible through robust local organizing and coordinated effort amongst a network of residents and organizations. This network continues to work together to steward North Park Village as a place that provides affordable senior housing, thriving natural areas, recreation opportunities, and more to all citizens of Chicago.

Per the NPVAC bylaws- “The primary purposes of the Advisory Council are to assist in the development and protection of North Park Village, and to act in cooperation and coordination with the City of Chicago, for the long term governance of the Village.”

Meetings of the North Park Village Advisory Council are on Zoom currently. Please subscribe to our newsletter below, or contact Carson Poole at cpoole@northrivercommission.org for more information.

The North Park Village Advisory Council meets on the third Wednesday of odd-numbered months, at 7:00PM. The Council is currently meeting via Zoom. 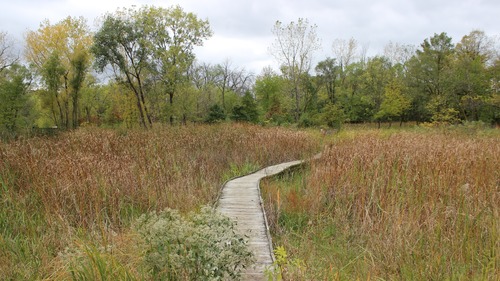 Get Involved! Add your voice to the future of North Park Village

In January 2022, the NPV Advisory Council voted to undertake a process that will create an updated plan for North Park Village. The plan will address an evolving range of topics including:

Take the NPV Building for the Future survey here

The NPV Advisory Council was originally formed from the Save the MTS Coalition, and its original mission was to work with the City of Chicago Planning Department to plan for, monitor implementation, and oversee management of North Park Village.

North Park Village is public property, and success over the years – its preservation through a conservation easement, development of senior housing, parks & recreation facilities, community gardens - has only occurred because of informed and determined public processes, and are a unique achievement of united community action

Despite various efforts by the community, the City of Chicago has not engaged in significant updates to plans at NPV since the 1980s. Several buildings in North Park Village are vacant or underutilized. Potential changes in open space management and landscaping by the City and Park District are underway, and the community should weigh in to ensure the incorporate more a more sustainable and resilient landscape. There are also many unrealized goals for cultural uses, historic preservation, education that have been surfaced during previous planning efforts that should be reconsidered. Lastly, there are ongoing community issues related to transportation, parking, wayfinding, public safety, and amenities like seating.

Outreach Campaign Page: Remembering our Past, Living in the Present, and Building for the Future

North Park Village is a 155-acre site at the location of the former Chicago Municipal Tuberculosis Sanitarium (MTS), which operated from 1911 to 1977. After the closure of the MTS, in the face of short-sighted commercial development proposals, a robust community effort was undertaken to preserve the site for community-centered uses.

By the 1970s, medical advances meant that declining numbers of people needed to visit sanitariums for treatment, and the MTS closed at the end of 1974. Shortly before that, in November 1973, developer Harry Chaddick proposed converting the nearly 160 acre MTS site in to a shopping complex and high rise apartments. This plan was strongly opposed by many area residents and local groups, including the North River Commission, an umbrella organization for local community groups that was founded in 1962.

With the support of the North River Commission and other local groups, the North River Coalition to Save the MTS Site was created. Northsiders opposed to commercial development on the MTS site attended meetings with city officials, wrote letters, surveyed local residents, held rallies, and researched alternative possibilities for the site. Their proposed uses for the land emphasized preserving open space and serving senior citizens. In 1975, Mayor Richard J. Daley proposed a plan for the site that incorporated many of the North River Coalition’s proposals, such as open space, a park, senior housing, and a health center. While the following decades continued to see disagreements and debates over the use of the land, many of these projects eventually became part of North Park Village, and the emphasis remained on open space rather than commercial development.

A groundbreaking for Pehr Peterson Park was held in 1977 on the former MTS grounds, and the area was officially given the name North Park Village in February 1979. In the next decade, two senior housing complexes and a health center opened, programs and events were held at the Nature Center, and plans began to renovate the MTS theater building.

“The community prevailed because they persevered.”

The story of North Park Village is a shining example of the power of community voice, vision, and dedication. The persistent voice of a unified community triumphed to initially preserve a unique historical site and eventually transform it into a powerful asset. Today North Park Village has housing for hundreds of senior citizens, a dynamic set of natural environments, a popular and thriving Nature Center, a regional gymnastics center, a large traditional park with athletic fields, large community gardens, a nonprofit recycling center, offices, and more. Many historical MTS buildings remain, preserved for posterity and potentially for further re-use for community benefit.

The existence of North Park Village is the result of this community vision and the dedication of the people who used their voice to make it a reality for today and into the future. The moral is that while we, as individuals, may feel insignificant we are not, because with unity and persistence we can succeed!

Five senior housing developments are on site, comprising a total of 590 units, collectively managed by Elderly Housing Development & Operations Corporation (EHDOC). In the Southwest corner of the site are four buildings with private housing, called the Conservancy at North Park Village.

The campus also features several buildings and open spaces maintained by the City of Chicago Department of Assets, Information, and Services (AIS), offices for the Chicago Park District, Chicago Audubon Society, and a Chapel.

Per the bylaws, established civic organizations in the area bounded by Devon Avenue on the north, Montrose Avenue on the south, Central Avenue on the west, and the Chicago River Channel on the east, shall be eligible for membership and representation on the Council.

Other Chicago organizations or associations having historic or legitimate interest in the site and demonstrate willingness to provide service to North Park Village, shall be eligible to have a representative with a single vote. A new organization may be accepted for a six month provisional membership during which interval willingness to provide service can be demonstrated. At the end of the provisional period, the Committee on Membership will evaluate the service and make a
recommendation on permanent status.

To apply as an organization, please fill out a NPVAC 2019 Membership Form and send to Carson at cpoole@northrivercommission.org