Illinois Solar for All

Incentives for Affordable and Accessible Solar Energy in our Communities 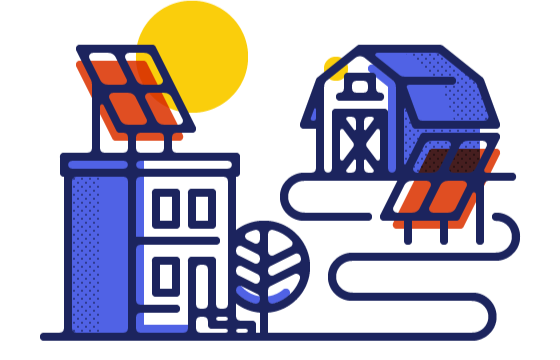 What is Illinois Solar for All?

Illinois Solar for All provides greater access to the clean energy economy for income-qualified and environmental justice communities across Illinois.

Through incentives, Illinois Solar For All makes solar installations and access to community solar more affordable, and results in measurable savings for participants.

Illinois Solar for All Process

Illinois Solar for All incentives are available for households with an income at or below 80% of Area Median Income (AMI), or buildings where a majority of tenants are within that income level.

See the chart below for AMI information for Chicago residents. If your household is within the range in the table below, you can participate in Illinois Solar for All.

Learn more about the process, and find Approved Vendors that are active in our area.

Approved ILSFA solar energy vendors can assess your home's solar potential and solar readiness. As with any home project, we recommend getting multiple quotes whenever possible.

Select a Vendor and work with NRC for Support

NRC staff are available throughout the process to help you understand offers from vendors, answer any questions, and provide connections to other resources that will help you to access solar energy through Illinois Solar for All.

Illinois Solar for All: Income Eligibility for Chicago Residents

Are you eligible for this program based on the criteria above? If so, contact us below!

In June 2020, ILSFA completed one of its first single-family home installations with the Dubois family in the Marynook neighborhood on Chicago’s South Side.

The day Dubois’s solar system was installed on their bungalow rooftop was exciting. “It was like we were in Hollywood because the neighbors were interested, and they pulled over to see what was going on,” said Lytese Dubois.

Through ILSFA, the Dubois household doesn't have any upfront costs for their new rooftop solar system, and they’re expected to save over $10,000 on electricity costs over the next 15 years. The Dubois’ new solar system is connected to the electrical grid and has started to convert the sunlight it absorbs into electricity. It's estimated to save the Dubois household $46 per month for the first year of their contract, which they'll receive as credits on their electric bill. Since electricity costs are expected to rise over time, the system is estimated to save them over $10,400 over the course of their 15 and a half-year contract with Certasun.

See more of this success story and hear from Lysette Dubois here.

Illinois Solar for All Programs

Check the solar energy potential for your home with Google's Project Sunroof, a free tool.

Other Solar and Home Energy Programs

Not eligible for ILSFA, but still interested in solar?

Illinois Shines is the brand name for the Adjustable Block Program—a state-administered incentive program supporting the development of new solar energy generation in Illinois. Unlike Illinois Solar for All, Illinois Shines is open to anyone regardless of household income.

You may participate in Illinois Shines in one of two ways:

Illinois Solar For All